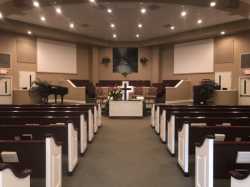 The First Baptist Church of Woodland Mills was organized in 1869, by a group of fifteen members who came from the Poplar Grove Baptist Church near State Line, Kentucky. These loyal pioneers were determined to provide a place for the worship of God since no other church had been established in the area. Mr. Swannie Burrus, a charter member and one of the first deacons, donated a piece of land northeast of Speed's Lime and Gravel, where the first church building was constructed. In 1896, this building was sold to Dan Rice used the material to build a house and a larger building was erected on the same site. In 1925, during a drive for more modern and consolidated schools, the land and building were sold and the Woodland Mills School building, which is the property where the church is now located was purchased from the county. In 1926, the school building was remodeled, and a basement was added later in 1939. In 1942, a building fund was begun to add the present sanctuary. The ground breaking took place in September of 1948, and the cornerstone was laid on February 8, 1949. The stained glass windows were memorial gifts and the baptistry scene was painted by Herbert Glen Boston. In 1960, the first floor of the annex was built. The sanctuary was refinished in 1965. In the summer of 1978, the second floor above the annex was added. The Family Life Center was finished in the spring of 2000.

The oldest organization of our church is the Sunday School program. It was started during the summer months when the church was first organized. The Ladies Aid was organized in 1913 and later became the Women's Missionary Union. Today they are known as the Women On Missions. The Kathleen Manley Circle was organized in 1944 and later had it's name changed to the Marsha Fords Circle.

Vacation Bible School was first held in 1933 with an enrollment of 14, and continues to minister to the children of our community. In February 1956, the church agreed to sponsor Lakeview Mission near Tiptonville, which became an independent church in May, 1962. In 1981, responding to Tennessee's involvement in a sister-state relationship with the Michigan Baptist Convention, the pastor led a mission team to Hartford, Michigan which resulted in a sister-church relationship with the Niles Avenue Baptist Church in St. Joseph.

Home missions the church is involved in include: the monthly ministry at the Union City Nursing and Rehabilitation, the Noonday Meal at the Baptist Collegiate Ministry at the University of Tennessee at Martin, the Obion County Backpack Program which provides food bags for local children, and an annual Back to School Bash were school supplies and clothing are donated to the local community.

The church has ordained several of its ministers to the gospel ministry as well as licensed men to preach the gospel. The current pastor Rick Burton, served as interim pastor from March 1991 to October 1991 when he officially became pastor. For more than a hundred years the believers, who are First Baptist Church Woodland Mills, have shared their testimony that faith in the death and resurrection of the Lord Jesus Christ brings forgiveness of sin and a transformed life. Led by faithful pastors, loyal deacons, and dedicated Bible teachers, the Church at Woodland Mills stands today as a testimony to the power and glory of the living God.